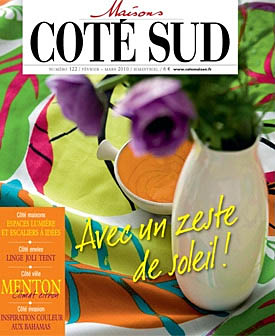 
If I had to choose just one decorating mag to buy a few times a year, it would be the French Côté Sud. I haven't seen anything that is more inspirational and beautiful. It inspired me to finally tackle my drab walls and make them shine. My home is now totally transformed.

The magazine covers interiors and decorating topics from (mostly) the Southern part of France, not just Provence. They regularly feature old farmhouses within 100 miles of the French Mediterranean coast. Plus sometimes Southern Mediterranean areas, for example Morocco, as well as the French Caribbean. (Hot, colourful, laid back - that kind of thing.)

The magazine is in French, of course, and my French, frankly, is on the bad side of not-so-good. But that doesn't matter much, because I "read" the photos. The colour sense these people have is second to none.


They also publish other "Côté" titles, like Côté Ouest (about living on the Atlantic coast of France, with excursions as far as the US), then Côté Est, which is mostly about the Eastern, mountainous part of France, but includes stories from Eastern Europe as well.

Their latest baby is Côté Paris, which I find the least interesting because you can get 'metropolitan' interiors elsewhere. Still, just thought I'd mention these.

And let me just say, Renate, I love your work about French interior design, particularly your photos. When's the next batch coming?


Renate's Reply: Great contribution, Fiona! And I agree with you about Côté Sud. It makes you want to sell your home and move to Aix-en-Provence tomorrow. Thank you for your compliment, too ... much appreciated. The next "French Country" batch is coming soon (bedrooms & bathrooms).

Join in and write your own page! It's easy to do. How? Simply click here to return to Interior Decorating Trends, News & Views.