Tale of a Timid Remodeler, Part I 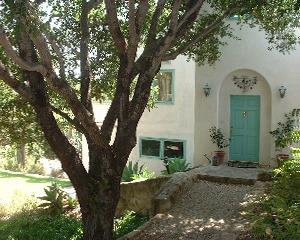 Cyndy's kitchen, before & after the remodel ... details below!

The exterior of my house looks like an old Mediterranean villa; but the interior is more modern, and the kitchen - well, the kitchen was my problem: a cheap, Home Depot afterthought.

Obviously the builder/owner had run out of money by the time he did that kitchen. Here are a few 'BEFORE' pictures - you get the gist? 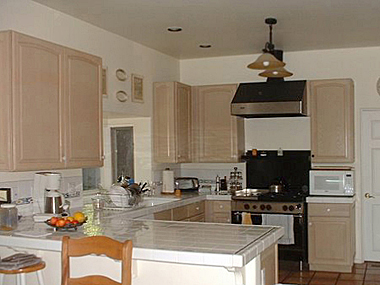 My husband and I didn't want or need to undertake an extensive, disruptive remodel.


We didn't want to
We simply wanted
I had accumulated countless ideas from browsing online, perusing magazines and books, and visiting open houses in our area.

In fact, I had collected so many ideas, that I unexpectedly found myself to be practically paralyzed once it came time for decision-making.

The thought of spending a lot of money and making costly mistakes overwhelmed me. So one of the biggest issues that arose was finding someone who would listen to me and help me achieve the look I wanted.

While dealing with carpenters, painters, and salesmen, I had to constantly remind myself that I did have definite ideas of my own, and that my taste in décor really isn't all that bad!

Unfortunately, I found myself to be way too timid about asserting myself into the process. This had a major impact on my ability to convey my ideas to others, and also my ability to implement ideas that may have further enhanced the room.


So, the other major issue I had to deal with was my own lack of self-confidence! Ultimately, that led me to a minimalist, piecemeal approach which I think unwittingly resulted in a kitchen that is just what I wanted.

The evolution of my project can't really be told without mentioning the fact that through that amazing vehicle, the internet, I was lucky enough to find a woman 6,000 miles from my home who took the time to listen to my ideas and prod me to get started. This newfound friend helped to narrow my focus and take my first timid steps. In terms of creating the Mediterranean look I wanted, she gave me this invaluable advice:

"The beauty is not so much in expensive cabinetry, but more in the old walls and floors, the earthenware, the table linen".

As you can see from the 'before' pics, cabinets had to be the # one priority. (What you can't see in the pictures is that the cabinets were not only ugly, but actually falling apart.)

My first bid was from a premier cabinetmaker in Santa Barbara who wanted every penny of my kitchen budget and none of my personal ideas. I interviewed 2 other cabinetmakers and waited months for their bids to arrive (one took a whole year to get back to me!).

But in all cases I experienced the same let-down. These contractors were not listening to me, and wanted just to recreate their favorite designs in my kitchen.

I became totally frustrated, feeling that any chance of individuality was lost.

In desperation to get the project started, I spotted a hutch-top in a Pottery Barn catalog and decided I would rip off 2 of the ugliest cabinets and replace them with that open shelving.

While asking a carpenter friend about the logistics of hanging the hutch top on the wall, he scoffed and told me he could make a better one, which he did. It cost 2x as much as the PB hutch, but it is the centerpiece of my kitchen and I love it.

I had been warned against open shelving, but I've not had a moment's regret. Most of the dishes that are exposed to falling dust are literally used and washed daily. I love the ease of reaching for and replacing those oft-used items. And I love looking at my dishes on that beautiful cabinet!


Renate's Reply: Cyndy, thank you so much for telling this story. Good on you for resisting the hard sell. I actually think you got the kitchen you wanted because you tenaciously held out for it! The hutch is utterly gorgeous, and I look forward to the second part of the story and the happy ending!