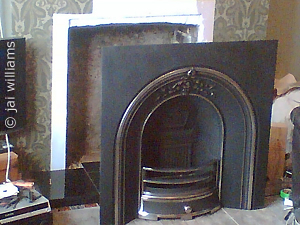 I had 'Sherlock Holmes' as a very loose theme for the front room. I also loved to see into the opulent homes around St James's Square in London at night when the lights are on.

I wanted a real open coal fire, with a chandelier hanging from the large ceiling rose that was already in place.

I trawled through dozens of websites in search of a modern but apt fireplace that would suit the ideas that I had.

Sadly, the styles I wanted were all too big for my fireplace opening, and I ended up choosing what was possibly my fifth favourite.

It’s simply a kit that is assembled and siliconed into place. Once a chimney sweep cleans, tests and certifies your chimney, you're ready to use it.

I chose an old chalk green as the primary colour for this room.


The wallpaper on the chimneystack is a replica of an early 1900’s flock paper that is reproduced and sold by an online company. Not cheap at nearly £50 a roll though!

I took that wallpaper to a large DIY store to get them to mix up the lightest colour of the pattern, and I used this for the main walls, while painting the niche to the left & right of the chimneystack in a dark version of the same green.

The room really came together quickly once I sanded down and varnished the original old floor boards.

Now if I stand outside and look up into my flat at night, it looks close to what I had seen in those beautiful houses in London. So I guess my plan worked! The open fire is the best feature of the room by far, and it's amazing on those cold winter nights.

Renate's comment:
Wow, Jai, you make it all sound so simple ... I love your color scheme, and the wallpaper is gorgeous, too! And isn't it amazing that the floorboards were in such good nick after more than a century?