Advent Table: The Journey Of The Three Kings 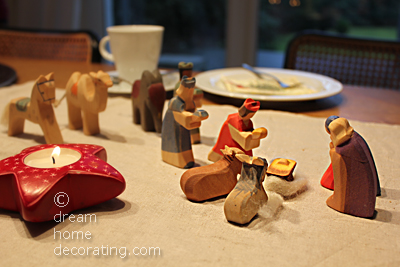 And she brought forth her firstborn son, and laid him in a manger; because there was no room for them in the inn. 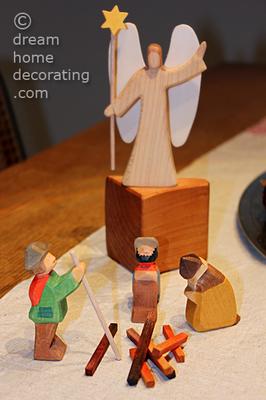 And the angel said unto them, fear not, for behold: I bring you good tidings of great joy. 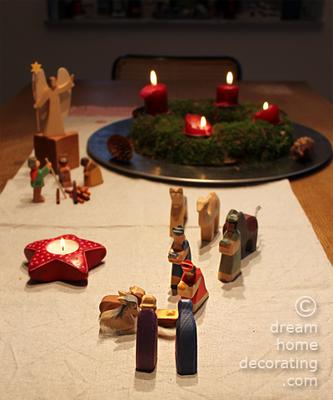 For unto you is born this day in the city of David a Saviour, which is Christ the Lord. 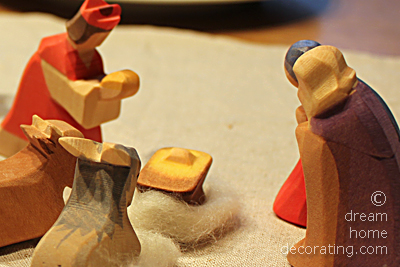 And they came with haste, and found Mary, and Joseph, and the babe.

Every year at the beginning of Advent, we create a nativity scene with traditional wooden figures: the magi and their entourage, the shepherds with the angel and the crèche with Mary, Joseph and the new-born baby.

This year’s version was set up as a centrepiece on our dining table.

To symbolize the journey from the beginning of Advent to Christmas Eve, we set the Three Kings far away from the manger, at the other end of the table.

As they follow the star, each day they come a little closer to the nativity scene until, on Christmas Eve, they have arrived at the stable in Bethlehem.

There's also an Advent wreath on the table. We make one every year with moss from the woodland behind our house. (You should be able to buy similar at florists’ or nurseries.)

To create the wreath, you simply nail moss patches onto a straw core. It's best to use nails with very small heads. Start with larger pieces of moss (about 10in diameter), and then fill in the gaps with smaller patches. No moss is needed underneath the wreath.

At the end, we push spiked candleholders into the wreath for the four Advent candles. We have different candle colours every year; this time our son chose burgundy :-)

I hope you all had a wonderful Christmas!
Home › Christmas Table Settings › Advent Table: Journey Of The Three Kings