Psychological Effects Of The Color Pink

Use the psychological effects of the color pink to create a fresh, soft look for your home. (No! No! It's not girly!) 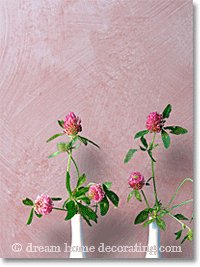 Interestingly, pink is the only tint of a primary color with a name of its own.

By contrast, 'baby blue' is still blue, and light green is still green!  Of course, some pale greens get their own monikers (e.g. 'mint') but these are not as universally used as 'pink'.

Also, check out how utterly different the psychological effects of the color pink are from those of its source color, red.

In most Western countries, the color pink is seen as a 'feminine' color. Ask any baby girl what color presents she gets!  Interestingly, though, things looked a bit different 100 years ago:

"... a June 1918 article from the trade publication Earnshaw's Infants' Department said, 'The generally accepted rule is pink for the boys, and blue for the girls. The reason is that pink, being a more decided and stronger color, is more suitable for the boy, while blue, which is more delicate and dainty, is prettier for the girl.'"

"In 1927, Time magazine printed a chart showing sex-appropriate colors for girls and boys according to leading U.S. stores. In Boston, Filene's told parents to dress boys in pink. So did Best & Co. in New York City, Halle's in Cleveland and Marshall Field in Chicago. Today's color dictate wasn't established until the 1940s".  (Source: Smithsonian)


Where are reliable gender stereotypes when you need them?  Seriously, if it took us no more than a few decades to ditch the idea that pink is "more decided and stronger" than blue, we can safely say that the concept of pink as a 'girly' color is not  hardwired into the human race. (Neither, it appears, is the widespread idea of 'delicate and dainty' girls, but that review is taking us a bit longer :-)


Here in Europe, refined/sophisticated (as well as embarrassingly kitschy and garish) versions of the color pink have been used both in 'masculine' and 'feminine' interiors - on and off - for centuries.

The European country with the least hangups about using pink in interior design is probably France.  However, you don't need to be French in order to like some of the 'male compatible' pink color schemes I've put together for you.

Generally, when used in interior design, the psychological effect of the color pink is described as soothing and comforting.

In Rudolf Steiner schools and hospitals, interior walls are often colorwashed in warm, gentle hues of the color pink because of their soothing, healing qualities.

This page is about the effects of pink color ...

... for more info about color psychology, please go to the general psychology of color article.


Also, what about all the pink-colored cakes & candy you have eaten, or been tempted to eat, in your life? Some versions of the color pink have a sweetness and freshness about them that is very hard to resist. I mean, c'mon. Pink cupcakes are awesome.

Just like red, pink color comes in lots of hues. Ripe-peach pink, bubble gum pink, hot Caribbean pink - they each have their own appeal and psychological effects. 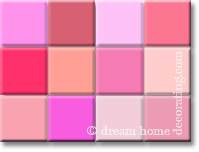 In the 1970s, head coach Hayden Fry of Iowa State University decided to utilize the psychological effects of the color pink to the advantage of his football team.

He had the visiting team's locker room painted pink - a much-debated attempt to, erm, relax the players more than they would have liked.

Sometimes it worked and sometimes it didn't, depending on how prepared the visiting team were to have their feathers ruffled. But the color scheme has been in operation ever since, with a consistently mixed success rate :-)


Now, I do understand that if you're a man, a wall in the palest terracotta pink may not be worth risking your reputation for. I get it. Particularly after the color psychology experiment I recently set up for my wonderful, upright and totally unsuspecting English husband: I went and bought new bedlinen with gorgeous flowers printed all over it. Yes, they were pink. And yes, I should have known better. For what felt like a very long ten minutes, he actually refused to sleep under the new bedding!


Remember, though, it only takes a boat ride across 50 miles of water and you're in a different universe. Here's a reader letter from France:

"I had an LOL moment when I read your comment that pink has a great acceptance in France ... it is my French husband's favorite color! We have a pink wall in the living room, tile in the kitchen with pink dots on it and a lavender-pink bedroom."

Thanks for the support, Patricia. (And it is  gorgeous bedlinen.)


To check out the psychological effects of other colors, take your pick from the following links:


Yet to find the information you're looking for? Type a word or phrase into the search box below:

Return from Psychological Effects Color Pink to the main Color Psychology information page, or to the

Have your say about what you just read! Leave me a comment in the box below.