Toile curtains & valances lend gorgeous French flair to any room!
This shop (in partnership with Amazon)  offers a selection of curtains and valances in French toile.  Browse by color:  Black / Red / Blue / Other

If you just want to jazz up a simple linen curtain with some  toile de Jouy fabric, check out these 7 ideas for simple, authentic-looking French country window treatments with toile de Jouy.

Click a picture to explore!
If one of the toile window treatments shows in the 'wrong' color, you'll find that this French toile curtain comes with several color choices.

Click a picture to explore!
If one of the toile window treatments shows in the 'wrong' color, you'll find that this curtain in French toile comes with several color choices.

Click a picture to explore!
If one of the toile window treatments shows in the 'wrong' color, you'll find that this French toile curtain comes with several color choices.

Toile Curtains & Valances In Other Colors

Click a picture to explore!
Several of these toile window coverings come with multiple color choices.


Country French Curtains #1:
How To Use Toile de Jouy For Window Treatments

Even though toile de Jouy  has a worldwide reputation of being "quintessentially French", I haven't seen it used prominently for French window treatments in France.


The French tend to combine toile with other fabrics:

Throw pillows or sofa cushions come in an easy, elegant mix of unbleached linen, ticking, and toile, and French country window treatments may combine linen, ticking or lace with some toile  detail.

You're unlikely to see entire  toile curtains at every French country window!


To illustrate some ideas, here's a series of "how to 'do' toile window coverings". The first example is a medium weight linen curtain with French toile at the bottom: 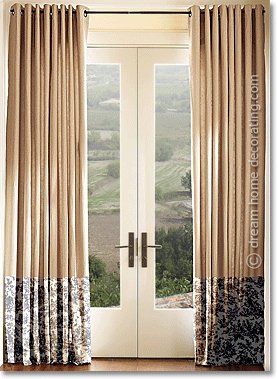 
Rather than attaching the toile fabric as a curtain extension, layer it on top to create a heavier, more substantial drape. 
The above curtain would also look great if it ended in a 'puddle':

Just make each panel 6 to 8 inches longer, so that the toile border drops onto the floor in glamourously casual folds ...

... they will attract even more attention than the plain toile border in the pic above. (They'll also look much better than this photoshopped illustration, I promise ;-)


The next toile window treatment looks particularly good when you draw the curtains at night and the toile borders meet in the middle to form a stripe down the center: 
If you would like to draw the eye up instead, use toile de Jouy  at the top of the curtain. Here, the toile border is accented with a solid-color ribbon: 
There are many more ways to use toile as 'eye candy' at the top of a plain curtain. For example, if you have a curtain made of sheer linen, cheesecloth, bleached/unbleached linen or translucent cotton, just add a layer of toile de Jouy  as ... 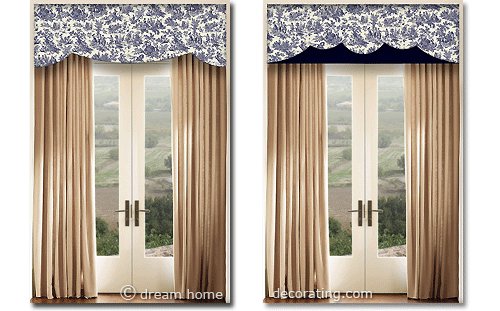 ♦   It displays the beauty of a toile pattern without distorting it, and

♦   You can use a pelmet to evoke the simplified, graceful shapes of the Louis XVI period (1760-1789) when toile de Jouy  was first invented.

To let more light in, replace the heavy linen with lighter, more translucent fabrics or sheers:

If privacy is not an issue, why not use a toile-covered pelmet sans  curtain? You could also play with more fanciful pelmet shapes to make up for the missing layer of curtain fabric. Be bold ... toile de Jouy  is always good for a BIG statement :-)

More Toile (And Not Just Curtains):


Yet to find the information you're looking for? Type a word or phrase into the search box below:

Read more about Decorating With Toile.

Return from Toile Curtains to the Dream Home Decorating homepage.

What Is
French Toile Fabric?